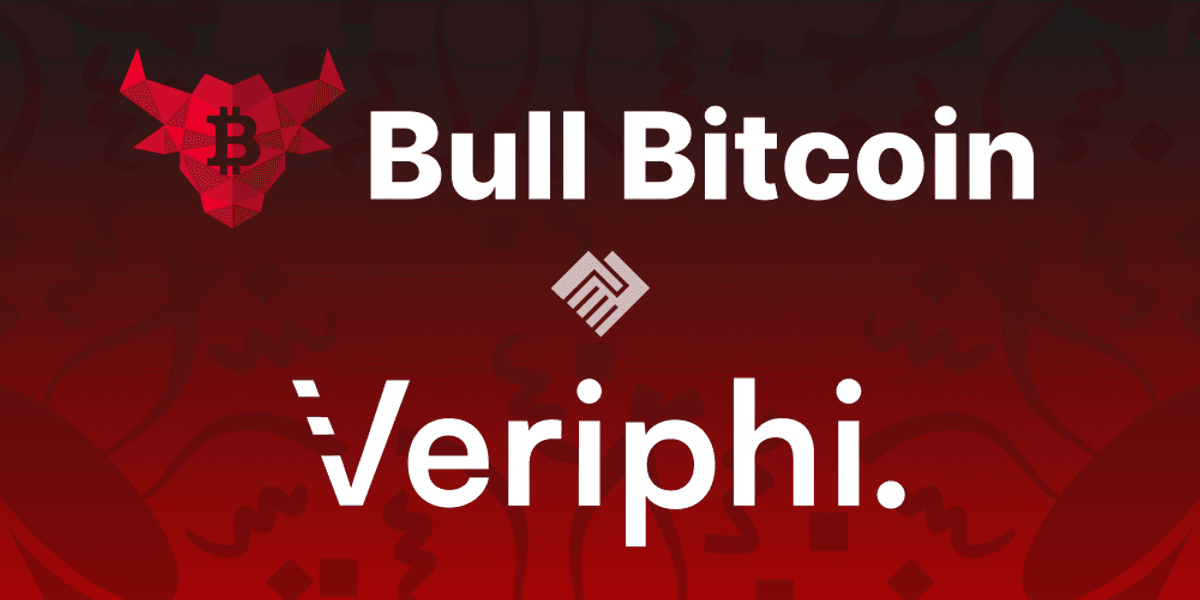 The acquisition of Veriphi Inc. by Bull Bitcoin (Satoshi Portal Inc.) is a critical milestone in Canada’s Bitcoin payments, exchanges and professional services industry. Increasing Bull Bitcoin’s team with 6 of Canada’s most talented Bitcoin experts, the primary purpose of this acquisition will be to develop world-class Bitcoin self-custody products and services that will be offered internationally to individuals and institutions, taking Bull Bitcoin’s globally trusted brand beyond its native borders of Canada and lifting up the standards of excellence for all Bitcoin companies to follow.

This is the second major acquisition by Bull Bitcoin (Satoshi Portal Inc.) after Bylls, the world’s first Bitcoin bill payment service founded in 2013, acquired in 2016.

This undoubtedly cements Bull Bitcoin’s position as Canada’s most respected Bitcoin institution and will catalyse the company’s already phenomenal growth. Being entirely self-funded without any venture capital or financial institution backing, the financing for this acquisition comes directly from Bitcoin’s Number Go Up technology and Bull Bitcoin’s decision to keep the entirety of its balance sheet in Bitcoin since its inception in 2015.

Non-custodial at all cost

The Bitcoin narrative has shifted towards self-custody, and we’re ahead of the curve. In a world of chaos and uncertainty, it’s more important than ever to double down on Bitcoin’s cypherpunk ethos.

Bull Bitcoin has always been a world leader in developing best practices for Bitcoin exchanges and payments services, having implemented a fully non-custodial Bitcoin-only user experience integrating bleeding edge second-layer technologies such as Liquid Network, Lightning Network, Coinjoin and transaction batching. Our mission is to build the financial and software infrastructure that the Bitcoin Standard deserves.

Bull Bitcoin requires its users to have their own Bitcoin wallet and hold their own Bitcoin keys before being able to use its services. The ideological commitment to never be custodians of our users’ Bitcoins is at the core of Bull Bitcoin’s identity. We create Bitcoiners, not shitcoiners — our clients are not merely people with exposure to the price of Bitcoin.

The non-custodial model places Bull Bitcoin at a considerable business disadvantage compared to its custodial shitcoining competitors because it dramatically increases the friction of onboarding new users, places its users in a situation where they immediately have to take full responsibility to secure their bitcoins and actively discourages them from gambling in favor of a buy and hold strategy. We not only have to provide support for our services, but we have a responsibility to provide advice and help on how to self-custody Bitcoin. We refuse to compromise on our values, cut corners on privacy and self-custody and act against the best interests of our users just because it’s easier.

That’s where the Veriphi team comes in.

Veriphi is Canada’s only white glove service provider for Bitcoin self-custody. Founded in 2019, Veriphi has always had a close relationship with Bull Bitcoin, notably as co-hosts of the Montreal Bitcoin Meetup, and as contributors to Bull Bitcoin’s cyphernode open-source project. The team is well known in the Bitcoin community for their impeccable Bitcoin educational content, tutorials & how-to guides, Bitcoin wallet reviews, and security/privacy best practices.

By combining Bull Bitcoin’s infrastructure with Veriphi’s Bitcoin consulting expertise, we will establish ourselves as the world’s single best destination for new Bitcoiners to be onboarded, the right way. We expect our transactions volumes to increase significantly as a result and massively increase the proportion of Canadian bitcoiners holding their own keys and running their own full nodes.

Our message to the Bitcoin community is clear: you can absolutely trust us to take care of your friends and relatives when it comes to being onboarded to Bitcoin. You can drop them off in our care, and we guarantee we will turn anyone (even your grandmother) into a Sovereign Bitcoin holder. You can have piece of mind that they will have followed all the best practices and that trustworthy experts will guide them every step of the way with phone support.

On a personal note, I’ve personally been mentoring the guys at Veriphi for years. They are, without a doubt, the best successors I could have hoped for and I trusted them without reservation to advise my own family members about Bitcoin self-custody. I feel overwhelmed with gratitude and relief knowing that the future Bull Bitcoin’s uncompromising vision is one step closer to being secured.

Media or information requests can be sent to pleb.hodl@satoshiportal.com