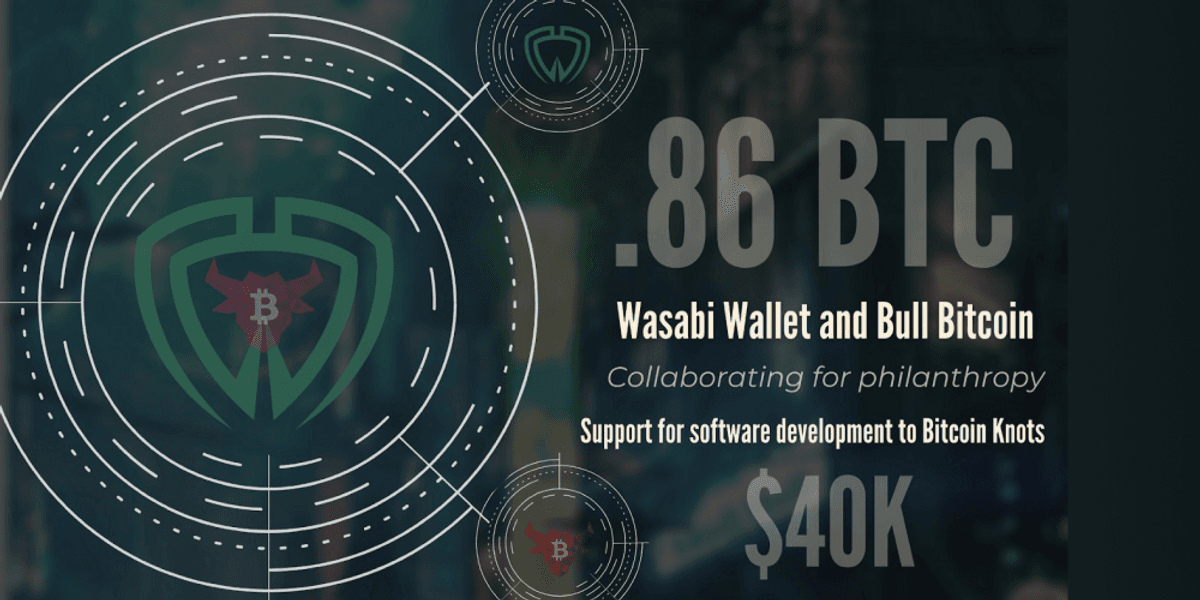 We can’t expect the world’s most talented experts to contribute indefinitely without financial compensation. If the companies that profit from Bitcoin open-source development don’t provide the necessary funding, who will?

One of Bull Bitcoin’s core values is “skin in the game”. Bull Bitcoin was created with the objective of building financial and software infrastructure to support the establishment of the Bitcoin Standard.

I am happy to announce a major milestone in fulfilling this mission: we are teaming up with Wasabi Wallet to provide a $40,000 Bitcoin open-source development grant to Bitcoin developer Luke-Jr.

The grant is awarded without terms or conditions on a no-strings-attached basis. The $20,000 contribution by Bull Bitcoin and $20,000 contribution by Wasabi Wallet (0.86 BTC total) have been paid in full at time of this announcement. We hope this grant will help Luke-Jr continue his work as lead maintainer of the Bitcoin Knots software project.

Luke-Jr has dedicated years of his life to the advancement of Bitcoin technologies. The list of his contributions and achievements is too long for me to describe without doing him a disservice. His knowledge, skills and expertise are invaluable and with few equals. There is no doubt he has consistently been — and remains — one of the most ardent defenders of the Bitcoin Network’s decentralization.

We encourage others to support Luke-Jr’s work by contacting him directly or, alternatively, by sponsoring him on Github.

Bitcoin Knots is a Bitcoin node and wallet software project used as an alternative to the more popular Bitcoin Core project. There are additional features in Bitcoin Knots not included in Bitcoin Core, some of which make transaction verification processes easier and more efficient in certain contexts.

Bitcoin Knots is, importantly, used as a dependency by other Bitcoin wallets, such as Wasabi Wallet, that wish to benefit from these features. This is important because Wasabi Wallet is the overall best and most effective tool for users to protect their privacy while using the Bitcoin network.

Wasabi Wallet is integrated within the Cyphernode open-source enterprise Bitcoin node and wallet software project which Bull Bitcoin and Bylls (among others) uses to process the Bitcoin deposits and withdrawals of their users. It is no secret that Bull Bitcoin uses the coinjoin technology developed by Wasabi Wallet to help protect privacy of its users. Consequently, Bitcoin transactions received by Bull Bitcoin or Bylls are verified using Bitcoin Knots (indirectly via Wasabi Wallet) in addition to the verification independently performed by Cyphernode’s Bitcoin Core component.

Generally speaking, regardless of current practical features of Bitcoin Knots, it is a good idea for well-maintained Bitcoin node and wallet software projects to exist as alternatives to Bitcoin Core should its maintainers no longer meet the requirements of its users.

Shrewd observers will note that this grant is awarded at an important time in the history of Bitcoin development: the activation of the Taproot soft fork. While it is true that this event may have reminded us of the invaluable past and current research and development contributions of Luke-Jr in respect to the activation of soft forks, we want to make it absolutely clear that our grant is unrelated to Taproot activation via BIP8 LOT=True.